We’ve been automating news since 2015 to fit with the business and journalism strategy of dozens and dozens of publishers. We have learnings to share.

This is our newsroom knowledge hub
– feel free to explore.

Why volume is the real star of news automation

For the publishers we work with, there is one aspect of automated content that really stands out. One key value they leverage – namely the volume of texts the robots can produce. Time and again we see it. Media companies discovering the real benefit of news automation when they start using it to provide coverage where there previously was none. For sports e g, it means you can set up a publishing timeline (see image) for every league, every match, every reader – all generated automatically.

Update: The Q&A function won a third place in the Best New Technology or Digital Product category of the 2020 Global Media Awards.

Talking to a BBC journalist the other day, I was laying out the drivers behind newsroom automation at Swedish local media groups. We agreed it sounds somewhat contradictory that robots now play an active role in creating journalism that involves hundreds – thousands – of people that were rarely seen in local news stories before. I was talking specifically about our Sports robot’s Q&A function, which – we’re very happy to say – has been nominated in INMA’s 2020 Global Media Awards.

Automation in the newsroom – many publishers talk about it, relatively few have any actual experience. Where do you start? How do you generate any real benefits? It may sound like a technical issue, but the tech is actually the most straight-forward part. This blog lays out some of the top success factors for newsrooms deploying automated content and explains how it’s all about improving journalism and growing business. 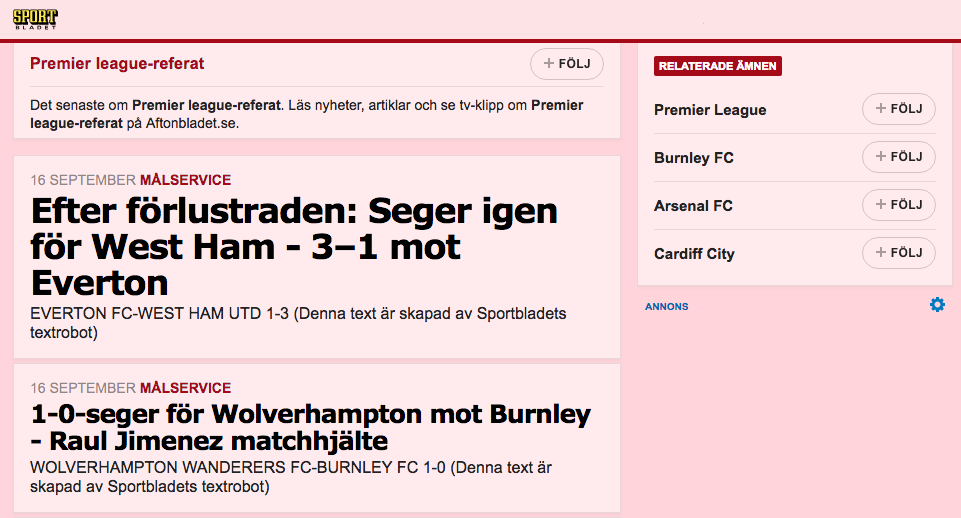 “Speed and the ability to cover all matches in every round were key factors in this project,” says Sportbladet project manager Mattias Andersson.

How robots put newsrooms in control

When a publisher decides to deploy tech for automated content, the primary reason is generally a business one – the robots generate additional coverage which in turn drive advertising and reader revenues. However, introducing data driven robot journalism has a secondary effect: It constitutes a new editorial tool – in more ways than one.

Journalists with robot experience: "Not a threat!"

We recently received a question from two German researchers: Do journalists profit from the automated journalism or do they find themselves homeless a few years later? We reflected that this focus on the potential threat of automated content to reporters’ jobs and the quality of journalism is all but gone in Sweden. And that this may have something to do with the fact that here, almost all local media houses now use the technology every single day.

Robot journalism is officially the future

The 2019 edition of Schibsted’s much publicised yearly Future Report was published yesterday. We’re very happy to find robot journalism generally identified as a key trend for the future. And to find United Robots specifically featured, through our collaboration with Aftonbladet.